Model Data and its selection: 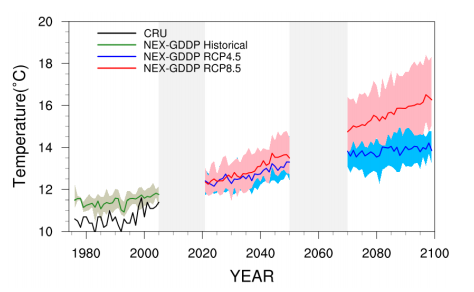 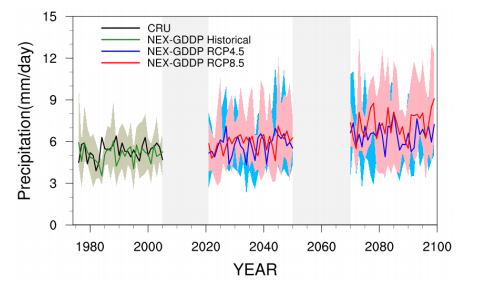 Figure 1 (Left) shows the future climate projection for temperature (ensemble of 5 GCMs chosen in this study), for Bhutan. The historical values are shown to compare GCM simulations with the observation and to suggest future projected trends. As depicted in Figure 1 (Left), the rise in temperature over Bhutan is evident under the future scenarios of RCP 4.5 and 8.5. There is a clear divergence of the signal after the mid-century. The RCP4.5 and RCP8.5 follow closely during the immediate future and differently by the end of the century. As to rainfall, an overlap is seen with higher values projected by RCP 8.5. The rainfall projection shows no significant increase on an average (Figure 1, Right), however, the variability within the model is large and increasing towards the end of the century.

A detailed table of all these temperature changes on annual and seasonal time scales, during 2021-2050 and 2070-2099, under both the scenarios of RCP 4.5 and RCP 8.5 are provided in the attached document below.

A detailed table of the projected increases of rainfall during 2021-2050 and 2070-2099 over Bhutan, on annual and seasonal time scales are provided in the attached document below.